Circe (or Melissa) is an oil on canvas painting executed by Dosso Dossi and datable to c.1518. Its dimensions are 172 x 153 cm. 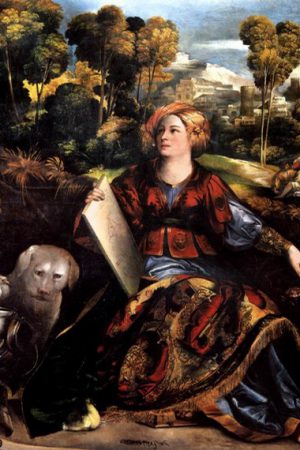 Dosso Dossi (c. 1479–1542) or, actually, Giovanni de Lutero, was the Italian painter of the late Renaissance period. He came from Trentino area and studied in the workshop of Lorenzo Costa. Moreover, the painter was influenced by Giorgione and Raphael. Dossi worked at the court of the dukes in Ferrara, as well as in Modena, Mantua and Venice.

The most interesting side of Dossi’s work is his interest in the unfolded landscape background, which sometimes occupies a dominant position in the painting, as with Melissa. However, Dosso Dossi also owns a number of finished landscape compositions representing a rarity for that time.

Dosso Dossi sometimes worked together with his brother Battista Dossi. Battista studied in Rome with Raphael. Both brothers worked mainly for the Dukes of Ferrara d’Este, but almost nothing remained of the murals of the ducal palaces and castles made by them. Dosso Dossi was the chief court painter of the d’Este family, together with his brother Batista he wrote for them mythological compositions, portraits and decorative frescoes.

The manner in which his portraits are executed is akin to the Venetian art of that time – so, in the portrait of Alfonso d’Este, Titian’s influence is clearly distinguished

Later, under the influence of paintings by the Venetians and Correggio, the motif of a semi-fantastic landscape illuminated by a mysterious, flickering light enters into the work of the Dossi brothers. Their easel paintings and portraits have been preserved, indicating that Dosso was significantly superior to his brother by talent (he was considered the head of the Ferrara school of painting). It is difficult to precisely distinguish between the work of both brothers. Older brother (Dosso Dossi) died in 1542, younger (Battista Dossi) – in 1548.

The painting, datable to c.1518, is one of the paintings sent from Ferrara to Scipione Borghese by Cardinal Enzo Bentivoglio, and is first mentioned as being in the collection by Giacomo Manilli in 1650. In addition to enhancing the painting’s refined colours, recent conversation work has revealed, as is the case with Apollo and Daphne (Room VIII), the presence of various “pentimenti”; on the left side, instead of the present dog and armour, there was a male figure to whom the sorceress looked.

The female figure with a turban, who stands out in the painting with her impressive presence and the rich colours of her mantle, holds, as well as a torch, a tablet bearing cabbalistic designs. She has been identified both as Homer’s sorceress Circe and as Melissa on the basis of a number of stanzas of Ludovico Ariosto’s “Orlando Furioso” (canto VIII, 14-15), which describe the liberation of a group of knights, who may be represented in the painting by the embryonic forms hanging on the tree trunks on the left.

Dosso Dossi (1489-1542), real name Giovanni di Niccolo de Luteri, was an Italian Renaissance painter from the School of Ferrara. His paintings are in style mainly influenced by Venetian painting, particularly Giorgione and early Titian. From 1514 he was court artist to the Este Dukes of Ferrara and Modena, whose small court valued its reputation as an artistic center. Dosso Dossi often collaborated with his younger brother Battista Dossi, who had worked under Raphael. The painter is known less for his naturalism or attention to design than for cryptic symbolic conceits in works of art around mythological topics.