Madonna with Child between Saints Flavian and Onuphirus

Madonna with Child between Saints Flavian and Onuphirus (Virgin and Child with St Ignatius of Antioch and St Onuphrius) is an oil on panel painting (51 x 65 cm) by Lorenzo Lotto, located in the Borghese Gallery. It is signed and dated to 1508. 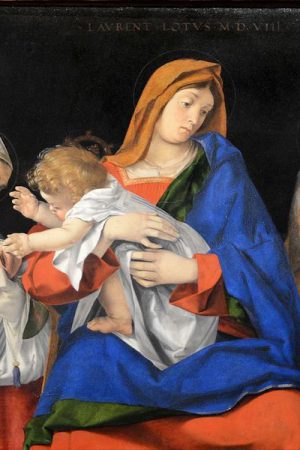 The painting was executed in the same year of the Recanati Polyptych, when the artist moved to the Eternal City.

Firstly, the artwork was mentioned in a 1693 document, when it was already part of the Borghese Collection

The artwork uses the Holy Conversation composition, with the Madonna and Child in the center with two saints, which is a topic frequently used by Giovanni Bellini and other famous Venetian artists of the time. It was sold to the Italian State, together with other paintings, in exchange for the so-called “Cesare Borgia,” attributed to Raphael.

The artwork is signed and dated LAVRENT.LOTVS. M.D.VIIJ. Moreover, it shows the impact of “Christ among the Doctors” by Albrecht Durer (Thyssen-Bornemisza Collection, Madrid); particularly, the figure of St Onuphrius is probably have been derived from the scribe in Durer’s painting.

The painting shows on a dark background a thoughtful Madonna. The four figures in this “sacra conversazione” are connected by gestures and glances that are exchanged, on the left, between the Child and St Ignatius of Antioch, with his richly decorated vestments, and, on the right between the Virgin and St Onuphrius, who is naked with long hair.

(1480-1556/7) was an Italian painter, draughtsman and illustrator, traditionally placed in the Venetian school, through main part of his career was spent in other North Italian cities. He worked mainly on altarpieces, religious subjects and portraits. The artist was active during the High Renaissance and the first half of the Mannerist period. Thanks to the work of the art historian Bernard Berenson, Lotto was rediscovered at the end of the 19th century. Since then, many monographs and exhibitions have been devoted to Lorenzo Lotto.