Tiziano Vecelli or Vecellio (1488/90-1576), known in English as Titian, was an Italian painter during the Renaissance, considered an essential member of the 16th-century Venetian school. Titian was one of the most versatile Italian painters who was famous among his contemporaries as “The Sun Amidst Small Stars” (recalling the final favorite line of Dante’s Paradiso). They worked on portraits, landscape backgrounds, and mythological and religious subjects. His painting methods, particularly in the application and use of color, influenced other painters of the late Italian Renaissance and future generations of Western art. 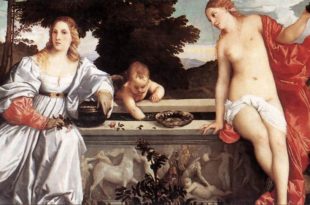