St Jerome is an oil on canvas painting by Federico Barocci (Federico Fiori), located in the Borghese Gallery in Rome. Its dimensions are 97 x 67 cm. 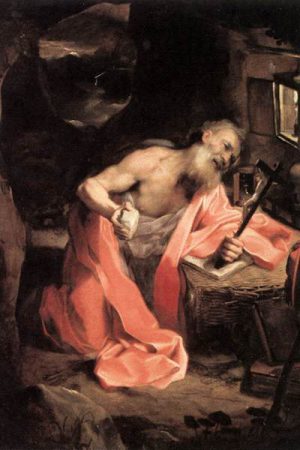 The painting, of which numerous preparatory drawings remain, is registered in the Collection starting from the end of the seventeenth century. The period and style of the artwork refer to the Barocco period. Barocci was born in 1528 and executed this painting in 1598.

One of the fundamental characteristics of the great Urbino painter’s work is in fact the technical innovation in the sign of the great scientific and mathematical tradition of the court of Urbino. Instead of contrasting the emotional flow that strikes the observer, the precision of his works exalts him, helping to create a harmonious concert of figures, spaces, colors and lights in an engaging but at the same time reassuring way. The painter was able to refine the use of numerous innovations and stylistic techniques during his voluntary exile from Urbino after a brief Roman period.

He moved to Rome in the wake of his uncle, the great architect Bartolomeo Genga, who returned to Urbino after a few years due to serious health problems, caused by a poisoning at the hands of painters envious of his success. He remained in Urbino until his death in 1612, under the protection of the last Duke Francesco Maria II Della Rovere.

Another characteristic element of Barocci’s painting is the use of harmonious, brilliant, enveloping and perfectly balanced colors with a wise use of the light that makes them iridescent and in relief, almost creating a scenographic system articulated on different perspective planes

Although Federico Barocci owes much to the work of Raphael, Michelangelo, Correggio and Titian, he is actually a reformer of art, an artist projected into the future and not a “simple” mannerist, that is admirer and pure imitator of the Renaissance. On the contrary he is, as many art historians will call him, “a progenitor of Baroque painting” who followed, however, applying it to perfection, the Renaissance rule of harmony between nature and idea, without exaggerating either one or the other factor. What guaranteed this perfection was above all the meticulous and organized art of the preparatory design. As Leonardo Da Vinci, Barocci always started from the observation of truth to create his models from which derived compositions devoid of any form of artifice and endowed with a spontaneous and natural grace despite the complex elaboration.

Pink of the mantle of St. Jerome – the only touch of color that stands out from the darkness of the cave, which is illuminated by the faint light of a candle placed in the lantern on the right. In addition to the stone with which he beats his chest, and the cross he holds, in the shadow of the rock other attributes of St. Jerome, the skull and cardinal’s hat are visible. The artist used the same model for the figure of the saint as Anchises in the painting of Aeneas Fleeing from Troy, also located in the room N13.

Barocci conducted a series of preparatory studies before doing this painting. Signed FED.BAROCIVS / VRBas PING.at and dated over the last two decades before the 16th century, this artwork was first registered in the 1693 inventory. The engraving after this work was done by Francesco Vilamena in 1600.

Federico Barocci (1535-1612) was an Italian Renaissance painter and printmaker. His original name was Federico Fiori, and he was nicknamed Il Baroccio. Motivated by a wide extend of Renaissance experts, including Raphael, Correggio, Jacopo Tintoretto, and Titian, Barocci created a unique style that combined uncommon color with figures in dynamic and dramatic postures. His visionary works are characterized by warmth of feeling and profound spirituality. A committed draughtsman, Barocci embraced totally new approaches to drawing, which permitted him to create a few abnormal painterly methods. Because of his adore of color, he drew in a range of tones and surfaces, being the primary Italian artist to systematically utilize colored pastels and oils as a part of the preparatory process.