Apollo and Daphne by Dosso Dossi

Apollo and Daphne (Apollo and Dafne) is oil on canvas by Dosso Dossi (Giovanni Luteri). Its dimensions are 191 x 116 cm. It is located in Room III of the Borghese Gallery in Rome.

Apollo is the god of poetry, and in this artwork, he is playing the lyre, raising his bow aloft. He has a green mantle, the edge of which is decorated with thin gold thread. Moreover, it matches his laurel crown, which refers to the transformation of the nymph Daphne into the tree that had become sacred to him.

This worldwide known mythological story is depicted in the left background of the art wor, where Daphne, the daughter of Mother Earth and the river god Peneus (or the river god Ladon) s fleeing from the attentions of Apollo. This flight coincides with her transformation into a Laurel tree

With the anatomical study of the body of Apollo, his pose is derived from that of the Belvedere Torso (located in Vatican Museums).

On another side, it has been noticed that the instrument Apollo is about to play (a lyre or viola da braccio) had already been represented in the Stanza della Segnatura by Raphael in his fresco Parnassus, thus affirming that Dosso Dossi visited Rome.

This canvas (datable to c.1525) comes from the bequest (1659) of Cardinal Luigi Capponi, as has recently been shown thanks to an archive document. Even though between 1623 and 1633, it was part of Cardinal Ludovico Ludovisi’s collection, before it may have belonged to Scipione Borghese. Moreover, a payment for a frame of this painting is documented in the cardinal’s collection. According to the dismemberment of the Ludovi Collection, the painting was purchased by Cardinal Luigi Capponi.

The canvas is listed as Orpheus by “Dosi di Ferrara” in the inventory of 1693. In the inventory of 1790, and until the fidei-comissum of 1833, the art work was, however, attributed to Caravaggio, while it was Giovanni Morelli who ascribed it to Dosso Dossi once again

Dosso Dossi (1489-1542), real name Giovanni di Niccolo de Luteri, was an Italian Renaissance painter from the School of Ferrara. His paintings are in style mainly influenced by Venetian painting, particularly Giorgione and early Titian. From 1514 he was court artist to the Este Dukes of Ferrara and Modena, whose small court valued its reputation as an artistic center. Dosso Dossi often collaborated with his younger brother Battista Dossi, who had worked under Raphael. The painter is known less for his naturalism or attention to design than for cryptic symbolic conceits in works of art around mythological topics. 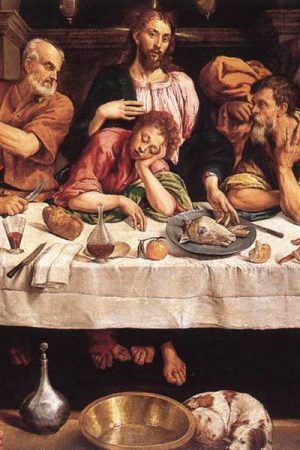