The Deposition (Deposizione di Cristo), also known as the Pala Baglione, Borghese Entombment or the Entombment, is an oil painting by Raphael. The artwork is signed and dated “Raphael. Urbinas. MDVII” (1507). Moreover, it is the central altarpiece commissioned by Atalanta Baglioni of Perugia in triumph of her slain son, Grifonetto Baglioni. The painting is on a wood panel that measures 179 x 174 cm. 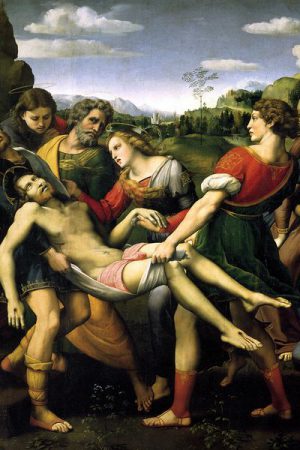 The Baglioni family were the lords of Perugia and nearby areas, who also led condottiere or leaders of mercenary troops. There was a particularly bloody occasion in Perugia on the night of July 3, 1500, when Grifonetto Baglioni and some angry family members conspired to kill most of the rest of the Baglioni family while they were sleeping. According to Matarazzo, a family biographer, after the bloodshed, Grifonetto’s mother Atalanta Baglioni refused to provide shelter to her son in her house. When he returned to the city, he ran to Jan Paolo Baglioni, the head of the family who had survived the night, escaping through the roof.

Atalanta changed her mind and rushed after her son but arrived only in time to see how Gian Paolo and his people killed her son. A few years later, Atalanta commissioned Raphael to paint an altar to commemorate Grifonetto in the family chapel in San Francesco al Prato.

This was the last of several large commissions of young Raphael in Perugia. He had already painted the Oddi Altarpiece for the same church (now in the Vatican) for the great rival of the Baglioni family and other great works. The new commission marked the formation of his mature style. The painting remained in the church until, in 1608, it was forcibly taken by a gang that worked for Cardinal Scipione Borghese, the nephew of Pope Paul V.

To appease the city of Perugia, the pope commissioned two copies of the painting by Giovanni Lanfranco and Cavaliere d ‘ Arpino. The one by Arpino is still in Perugia nowadays. Although it was confiscated by the French in 1797 and exhibited in the Louvre in Paris, it was returned to the Borghese Gallery in 1815, except for the predella, taken to the Vatican Museums.

As a model for the composition for this dramatic artwork, the artist used Perugino’s Pieta, executed in 1495 and now located in Palazzo Pitti. However, the latter embodies Christ seated on the ground, as was the custom of the time. He did a lot of work on the research of the individual figures and preparatory sketches for the whole image. The final result may have been created by juxtaposing two cartoons.

In fact, the scene depicted is neither a Deposition nor the Entombment but is located somewhere in the middle. From the background, we can understand it: on the right is Mount Calvary, the place of crucifixion and displacement, and on the left is the cave in which the Coffin will occur. So, two men who lack halos use a piece of flax to carry the dead Christ. They and Christ form powerful diagonals in the shape of the letter V. The young man on the right, holding Christ, is considered the image of the young people who were killed, the Griffonetto himself. In addition to the two men who carry the body, St. John and Nicodemus are standing behind and to the left, and Mary Magdalene, who holds the hand of Christ.

On the far right, in another figured group slightly behind the action, are the three Marys supporting the Virgin Mary, who fainted, most likely because of her overwhelming sadness. How the Mother of God kneels is hugely uncomfortable, with a firm twist and sharp drape. Although it can be seen in other well-known works, its location seems to have been directly inspired by the example of Doni Tondo by Michelangelo, created just a few years earlier.

In terms of color, Raphael balances the use of strong red, blue, yellow and green colors, and he creates a subtle contrast in his body tones, best seen by the fact that the living Mary Magdalene holds the dead hand of Christ

Previously, the altarpiece consisted of more than just the main panel. There was a top molding, which now you can find in the Galleria Nazionale dell Umbria in Perugia. It had a discussion of “God the Father in a glory of cherubim, blessing his son.” Moreover, the mainboard also included a frame, which is still there, decorated by griffins being crowned and fed by winged putti. There was a predella of three monochrome elements representing the Theological Virtues on a lower side. In addition, the three panels were lined up at the base of the altarpiece to illustrate: Hope, Charity, and Faith.

Raffaello Sanzio da Urbino (1483-1520), known as Raphael, was an Italian painter and architect of the High Renaissance. His artworks are famous for the clarity of form, ease of composition, and visual accomplishment of the Neoplatonic perfect of human magnificence. Along with Michelangelo and Leonardo da Vinci, he shapes the conventional trinity of incredible masters of that period.