Danae is an artwork by the Renaissance artist Correggio, created around 1531. 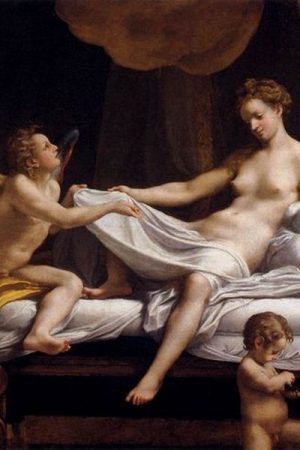 The painting was commissioned by the Duke of Mantua Federico II Gonzaga, as part of a series depicting the love of Jupiter, possibly intended for the Ovid Hall in the Palazzo Te of Mantua. After the death of Federico, the artwork went to Spain.

In 1584, the artist Giovanni Paolo Lomazzo mentions a canvas in Milan as part of the collection of sculptor Leone Leoni. His son Pompeo Leoni sold it to Emperor Rudolf II (1601–1603). Later, together with Leda and the Swan by Correggio, it was purchased from Prague to Stockholm as military production by the king of Sweden Gustavus Adolphus. His daughter Christina, after the abdication, brought the canvas with her to Rome. After her death, the canvas was inherited by Cardinal Decio Azzolino and later transferred to Livio Odescalchi, Duke of Bracciano, and then to the French regent Philip II of Orleans.

Together with most of the Orleans family collection, in 1792 it was sold to England, where it belonged to Duke Bridgewater and Henry Hope. In 1827, the painting was acquired in Paris by Prince Camillo Borghese for his Roman collection

The painting depicts the Greek mythological figure Danae, who was daughter of Acrisius, king of Argos, is visited by Jupiter, who has been transformed into a shower of gold, which Cupid collects from among the sheets. As a result of this union, Perseus was born. On the right side of the painting, at the foot of the bed, two amoretti, one holding an arrow, use a touchstone to test the endurance of love, which risks being corrupted by tact with gold. It is said that the building visible through the window is the unfurnished residence of Federico II Gonzaga at Marmirolo, near Mantua.

A small landscape outside the window and the sunset, the beauty of which is enveloped in the woman’s room, the tranquility of colors convey the divine light that is about to appear with the arrival of the main god and illuminate Danae. The tender body of the latter and the whiteness of the sheets indicate that the beauty will soon fly away to the heavenly spaces.

There are a lot of jokes about the great Italian artist, and today it is difficult to make out the truth or false in them. Some say that the painter never studied, that he simply wanted to paint masterpieces – and began to paint them; others contradict, claiming that Correggio learned to create, and studied very carefully and corrosively from recognized masters. Some say that the artist was impoverished, that he was paid for the work of “penny”, while others claim that he came from aristocrats, was very rich and diversified.

Many other disputes revolve around the artist, but one fact remains truthful: Correggio is a true genius and a master of chiaroscuro that plunges the viewer first into the center of the plot, and then allows him to take a break on third-party objects and images.